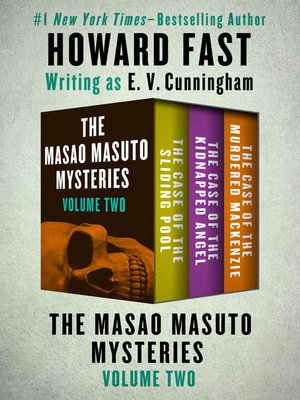 FictionMysteryThriller
A collection of thrilling murder mysteries featuring "an unusually interesting detective" from the #1 New York Times–bestselling author of Spartacus (The Washington Star).
Japanese-American Beverly Hills homicide detective Masao Masuto is a karate expert, a devotee of roses, and a Zen Buddhist. He does his job with a cool, caustic wit—and with surprising force when necessary. He possesses a singular sense of justice, taking action on his own and occasionally pushing the boundaries of the law . . .

The Case of the Sliding Pool: After a decades-old hidden grave is uncovered by a rainstorm, Detective Masuto must look into the distant past to find a murderer who was very good at his job—and who is about to come out of retirement.

The Case of the Kidnapped Angel: The wife of one of Hollywood's biggest movie stars has been kidnapped for ransom—one that is willingly paid. But Masuto doesn't believe the worried husband's performance. He suspects the payoff was for something deadly . . .

"A talent for all times." —The Moscow News

The Case of the Murdered McKenzie: When a faded movie beauty is accused of killing her rich husband, it seems like an open-and-shut case—until Masuto investigates. And it soon appears that murder is only the beginning of an even more shocking conspiracy.

"One of the best in the series." —The New York Times

As witty as he is wise, Detective Masuto is the brilliant creation of "one of the 20th century's busiest writers" known for "creating stories that even his critics admired as page-turners (The New York Times).

Howard Fast (1914–2003) was one of the most prolific American writers of the twentieth century. He was a bestselling author of more than eighty works of fiction, nonfiction, poetry, and screenplays. The son of immigrants, Fast grew up in New York ...

More about Howard Fast
The Masao Masuto Mysteries Volume Two
Copy and paste the code into your website.
New here? Learn how to read digital books for free