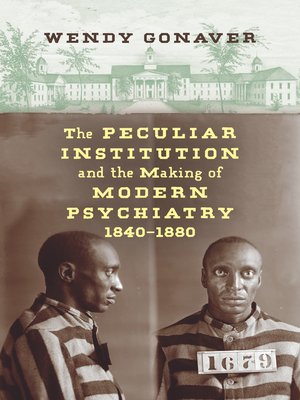 The Peculiar Institution and the Making of Modern Psychiatry, 1840–1880

MedicalPsychiatrySociologyNonfiction
Though the origins of asylums can be traced to Europe, the systematic segregation of the mentally ill into specialized institutions occurred in the Unites States only after 1800, just as the struggle to end slavery took hold. In this book, Wendy Gonaver examines the relationship between these two historical developments, showing how slavery and ideas about race shaped early mental health treatment in the United States, especially in the South. She reveals these connections through the histories of two asylums in Virginia: the Eastern Lunatic Asylum in Williamsburg, the first in the nation; and the Central Lunatic Asylum in Petersburg, the first created specifically for African Americans. Eastern Lunatic Asylum was the only institution to both accept slaves and free blacks as patients and to employ slaves as attendants.
Drawing from these institutions' untapped archives, Gonaver reveals how slavery influenced ideas about patient liberty, about the proper relationship between caregiver and patient, about what constituted healthy religious belief and unhealthy fanaticism, and about gender. This early form of psychiatric care acted as a precursor to public health policy for generations, and Gonaver's book fills an important gap in the historiography of mental health and race in the nineteenth century.
MedicalPsychiatrySociologyNonfiction

Wendy Gonaver is archives assistant at the Frank Mt. Pleasant Library of Special Collections and Archives at Chapman University.

More about Wendy Gonaver
The Peculiar Institution and the Making of Modern Psychiatry, 1840–1880
Copy and paste the code into your website.
New here? Learn how to read digital books for free