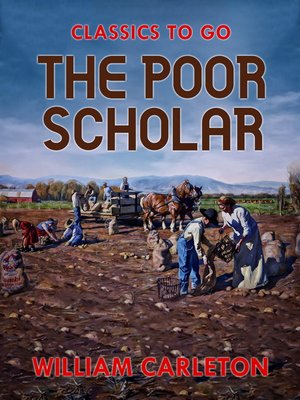 FictionLiteratureMythology
Excerpt: "One day about the middle of November, in the year 18—, Dominick M'Evoy and his son Jemmy were digging potatoes on the side of a hard, barren hill, called Esker Dhu. The day was bitter and wintry, the men were thinly clad, and as the keen blast swept across the hill with considerable violence, the sleet-like rain which it bore along pelted into their garments with pitiless severity. The father had advanced into more than middle age; and having held, at a rack-rent the miserable waste of farm which he occupied, he was compelled to exert himself in its cultivation, despite either obduracy of soil, or inclemency of weather. This day, however, was so unusually severe, that the old man began to feel incapable of continuing his toil. The son bore it better; but whenever a cold rush of stormy rain came over them, both were compelled to stand with their sides against it, and their heads turned, so as that the ear almost rested back upon the shoulder in order to throw the rain off their faces. Of each, however, that cheek which was exposed to the rain and storm was beaten into a red hue; whilst the other part of their faces was both pale and hunger-pinched."
FictionLiteratureMythology

More about William Carleton
The Poor Scholar
Copy and paste the code into your website.
New here? Learn how to read digital books for free