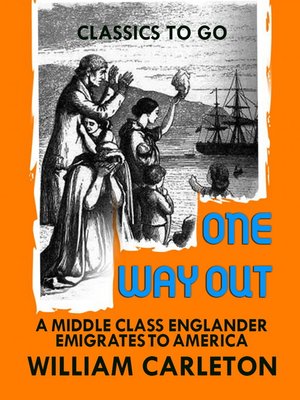 A Middle-class New-Englander Emigrates to America

FictionLiteratureMythology
Excerpt: "My great-grandfather was killed in the Revolution; my grandfather fought in the War of 1812; my father sacrificed his health in the Civil War; but I, though born in New England, am the first of my family to emigrate to this country—the United States of America. That sounds like a riddle or a paradox. It isn't; it's a plain statement of fact. As a matter of convenience let me call myself Carleton. I've no desire to make public my life for the sake of notoriety. My only idea in writing these personal details is the hope that they may help some poor devil out of the same hole in which I found myself mired. They are of too sacred a nature to share except impersonally. Even behind the disguise of an assumed name I passed some mighty uncomfortable hours a few months ago when I [sketched out for a magazine and saw in cold print what I'm now going to give in full. It made me feel as though I had pulled down the walls of my house and was living my life open to the view of the street. For a man whose home means what it does to me, there's nothing pleasant about that."
FictionLiteratureMythology

More about William Carleton
One Way Out
Copy and paste the code into your website.
New here? Learn how to read digital books for free