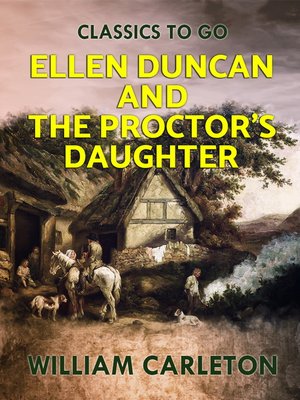 Ellen Duncan; and the Proctor's Daughter

FictionLiteratureMythology
Excerpt: "There are some griefs so deep and overwhelming, that even the best exertions of friendship and sympathy are unequal to the task of soothing or dispelling them. Such was the grief of Ellen Duncan, who was silently weeping in her lone cottage on the borders of Clare—a county at that time in a frightful state of anarchy and confusion. Owen Duncan, her husband, at the period about which our tale commences, resided in the cabin where he was born and reared, and to which, as well as a few acres of land adjoining, he had succeeded on the death of his father. They had not been long married, and never were husband and wife more attached. About this time outrages began to be perpetrated; and soon increased fearfully in number. Still Owen and Ellen lived happily, and without fear, as they were too poor for the marauders to dream of getting much booty by robbing; and their religion being known to be "the ould religion ov all ov all," in a warfare that was exclusively one of party, they were more protected than otherwise. Owen never was particularly thrifty; and as his means were small, was generally embarrassed, or rather somewhat pinched in circumstances. Notwithstanding this, however, he was as happy as a king; and according to his unlettered neighbors' artless praise, "there wasn't a readier hand, nor an opener heart in the wide world—that's iv he had id—but he hadn't an' more was the pity." His entire possessions consisted of the ground we have mentioned, most part of which was so rocky as to be entirely useless—a cow, a couple of pigs, and the "the uld cabin," which consisted of four mud walls, covered with thatch, in which was an opening, "to let in the day-light, an' to let out the smoke..."
FictionLiteratureMythology

More about William Carleton
Ellen Duncan; and the Proctor's Daughter
Copy and paste the code into your website.
New here? Learn how to read digital books for free