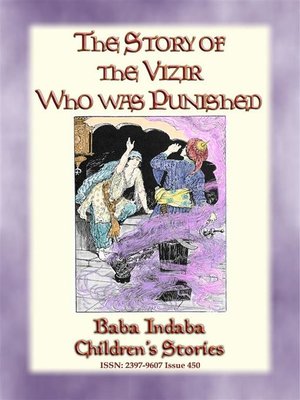 Juvenile FictionMythologyFolklore
ISSN: 2397-9607 Issue 450
In this 450th issue of the Baba Indaba's Children's Stories series, Baba Indaba narrates the Eastern Fairy Tale of "The Vizier who was punished"

ONCE, UPON A TIME, a long, long time ago and far, far away, there lived a king who had a son who was very fond of hunting.
He often allowed him to indulge in this pastime, but he had ordered his grand-vizier always to go with him, and never to lose sight of him. One day the huntsman roused a stag, and the prince, thinking that the vizier was behind, gave chase, and rode so hard that he found himself alone. He stopped, and having lost sight of it, he turned to rejoin the vizier, who had not been careful enough to follow him. But he lost his way. Whilst he was trying to find it, he saw on the side of the road a beautiful lady who was crying bitterly. He drew his horse's rein, and asked her who she was and what she was doing in this place, and if she needed help. "I am the daughter of an Indian king," she answered, "and whilst riding in the country I fell asleep and tumbled off. My horse has run away, and I do not know what has become of him."

The young prince took pity on her, and offered to take her behind him, which he did. As they passed by a ruined building the lady dismounted and went in. The prince also dismounted and followed her. To his great surprise, he heard her saying to someone inside, "Rejoice my children; I am bringing you a nice fat youth."

But then what happened you may ask? What happened to the prince? Did he make his escape or was he captured? What magic did the woman have? How did everything turn out in the end? Well, you'll have to download and read this story to find out for yourself.

BUY ANY of the 450+ BABA INDABA CHILDREN'S STORIES at https://goo.gl/LXNM

THE STORY OF THE VIZIER WHO WAS PUNISHED--An Eastern Fairy Tale
Copy and paste the code into your website.
New here? Learn how to read digital books for free