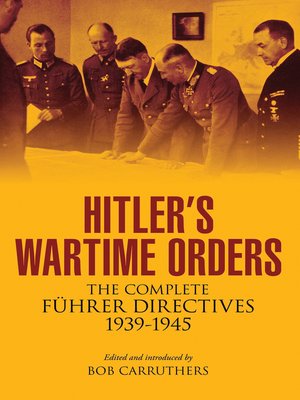 An Emmy Award–winning author presents the history of WWII through the military strategies, tactics, and decisions of the infamous Nazi dictator.

Edited by Bob Carruthers, Hitler's Wartime Orders is an important historical record of Adolf Hitler's war directives for the armies of Nazi Germany. From preparations for the invasion of Poland to his last desperate order to his troops on the Eastern Front, this volume provides fascinating insight into the proceedings of the Second World War and the mind of the man who launched the world into chaos.

As readers will observe in this fascinating volume, the initial optimism of 1939 devolved into the disarray of later orders. How those orders were received, processed, and carried out by the upper echelons of the Third Reich would come to shape the future of military policy. This unvarnished publication reveals the true nature of Adolf Hitler as a military commander and sheds light on the events of one of the world's greatest tragedies.

All the wartime orders have been typeset in a clear format and presented chronologically.