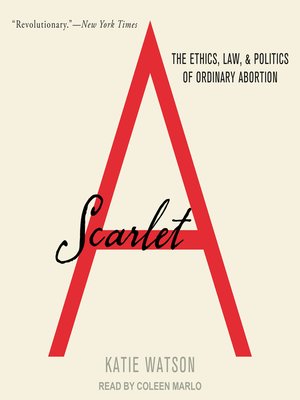 The Ethics, Law, and Politics of Ordinary Abortion

EthicsMedicalSociologyNonfiction
Although Roe v. Wade identified abortion as a constitutional right forty-five years ago, it still bears stigma-a proverbial scarlet A. Millions of Americans have participated in or benefited from an abortion, but few want to reveal that they have done so. Approximately one in five pregnancies in the U.S. ends in abortion. Why is something so common, which has been legal so long, still a source of shame and secrecy? Why is it so regularly debated by politicians, and so seldom divulged from friend to friend? In public discussion, both proponents and opponents of abortion's legality tend to focus on extraordinary cases. This tendency keeps the national debate polarized and contentious, and keeps our focus on the cases that occur the least. Professor Katie Watson focuses instead on the cases that happen the most, which she calls "ordinary abortion." Scarlet A gives the reflective listener a more accurate impression of what the majority of American abortion practice really looks like. It explains how our silence around private experience has distorted public opinion, and how including both ordinary abortion and abortion ethics could make our public exchanges more fruitful.
EthicsMedicalSociologyNonfiction

Katie Watson is an award-winning professor who has taught bioethics, medical humanities, and constitutional law for fifteen years at Northwestern University's Feinberg School of Medicine.

More about Katie Watson
Scarlet A
Copy and paste the code into your website.
New here? Learn how to read digital books for free