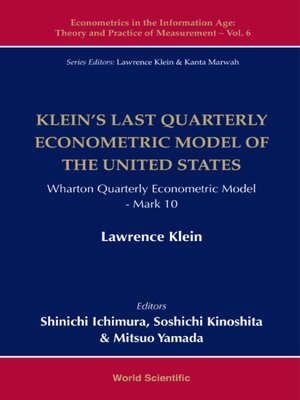 This book presents Professor Lawrence R Klein and his group's last quarterly econometric model of the United States economy that they had produced at the University of Pennsylvania. This is the last econometric model that Lawrence Klein and his disciples have left after some 50 years of cumulated efforts of constructing the US economy model up to around 2000. It was widely known as the WEFA Econometric Model Mark 10, and is the culmination of Professor Klein's research which spans more than 70 years, and would please not only Professor Klein's old students and colleagues, but also younger students who have heard so much of Klein models but have yet to see the latest model in its complete and printed form.