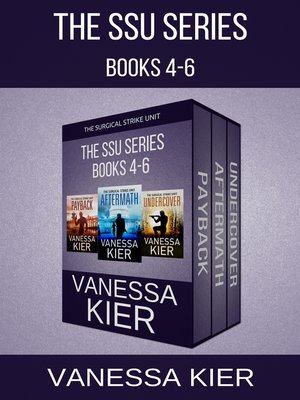 Finish the adventure with three action-packed stories of conspiracy, betrayal, and revenge...

Welcome to the world of The Surgical Strike Unit (SSU), a privately run special operations group. The SSU was founded by Ryker, a Vietnam veteran, to handle the national security jobs that the government couldn't—or wouldn't—do...

A microchip containing dangerous scientific research has gone missing. The SSU must locate the chip in order to keep the research out of the hands of the criminals and government agencies who would use the data to create a deadly, and unstable, army of superhuman soldiers.

The titles contained in this volume are:

Undercover – A Bonus Novella (technically, since it's a prequel, it's Book 0.5)

Each title is also available for purchase separately.

There are some lines even a cold-hearted spy won't cross...

In a desperate bid to find her missing brother, investigative reporter Faith Andrews teams up with ruthless CIA agent Mark Tonelli. Their investigation leads them into the dark underbelly of the government and to a plan to use enhanced soldiers, including Faith's brother, in an upcoming attack that will kill thousands of innocents.

WARNING: Payback takes place at the same time as Retribution, Book Three of the Surgical Strike Unit series. Since Payback contains spoilers for Retribution, I suggest that readers read Retribution before reading Payback.

He's tasked with keeping national secrets. Her job is to ferret them out. If they can't uncover the truth of a decades old conspiracy, the government will fall.

Investigative reporter Siobahn Murphy is convinced that there's a coverup around the recent death of the president. Ryker, the head of the SSU, knows Siobahn is right. Together they uncover the roots of a conspiracy dating back to the Vietnam War. A conspiracy that must be stopped once and for all before the government collapses from within.

In his quest for vengeance, he's turned himself into a criminal...

To avenge the shooting that put his father in a wheelchair, Niko Andros spent five years undercover. This is the story of how Niko brought down Mexican crime lord Jaime Alvarez.

If you like edge-of-your-seat action, government conspiracies, and characters forced to confront the darkness within themselves, then you'll love Vanessa Kier's action-packed SSU romantic thriller series. Get The SSU Series Books 4-6 today to complete the adventure!

*NOTE: Why does the title of this bundle say Books 4-6, if I'm going to number them this way? Because using Books 3.5-0.5 in the title would be even more confusing.

Vanessa Kier spends way too much time thinking up ways she can torture her characters. A worst-case scenario thinker, she's been creating stories in her head since childhood. Now she's found her niche in writing romantic thrillers that combine intense emotion with action-packed plots. The author of six books in The Surgical Strike Unit series about a privately run special operations group, she has set her new series WAR in West Africa, where she lived for a time.

When she's not writing, listening to music, or playing puzzle games on her mobile device, Vanessa writes the occasional Tech Talk column for her local RWA chapter's newsletter and takes long hikes in the nearby hills.

For more about Vanessa and to sign up for her newsletter, please...