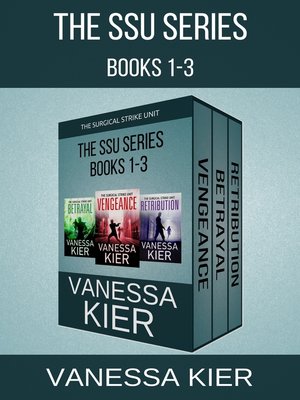 Begin the adventure with three action-packed stories of conspiracy, betrayal, and revenge...

Welcome to the world of The Surgical Strike Unit (SSU), a privately run special operations group. The SSU was founded by Ryker, a Vietnam veteran, to handle the national security jobs that the government couldn't—or wouldn't—do...

A microchip containing dangerous scientific research has gone missing. The SSU must locate the chip in order to keep the research out of the hands of the criminals and government agencies who would use the data to create a deadly, and unstable, army of superhuman soldiers.

The titles included in this box set are:

Each title is also available for purchase separately.

One stolen microchip. Two missions of vengeance. An international manhunt. Trust the wrong person and you're dead.

Former art history student Jenna Paterson vows revenge on her once beloved older brother, Kai, believing him responsible for the attack that killed their parents. But Kai has disappeared with a microchip containing deadly government research data.

Undercover agent Niko Andros will go to any length to get the microchip so he can trade it for his kidnapped aunt–including using Jenna as bait.

An innocent woman is caught in the crosshairs of an international manhunt. Can she trust the most wanted man on the planet to save her?

Accused of murder and of stealing a lethal government microchip, SSU agent Kai Paterson finally has a lead on the true location of the chip. If he finds it before the government and the criminal elements chasing him, he has a chance to clear his name.

But the chip has been implanted in the body of internationally renowned archaeologist Susana Dias. With the other hunters closing in, Kai races to find a solution that will both save Susana and prevent the data from falling into the wrong hands.

The government is about to unleash a secret weapon against an innocent population. Only one man can stop the destruction. But first, he has to remember...

SSU agent Rafe Andros is captured and forced into a secret government program. By the time he emerges, he's little more than a mindless killing machine with no memory.

Scientist Gabby Montague races to unlock Rafe's memories and the details he holds about an upcoming attack. If she fails, an army of superhuman soldiers will be unleashed against an innocent population.

If you like edge-of-your-seat action, government conspiracies, and characters forced to confront the darkness within themselves, then you'll love Vanessa Kier's action-packed SSU romantic thriller series. Get The SSU Series Books 1-3 today to begin the adventure!

Vanessa Kier spends way too much time thinking up ways she can torture her characters. A worst-case scenario thinker, she's been creating stories in her head since childhood. Now she's found her niche in writing romantic thrillers that combine intense emotion with action-packed plots. The author of six books in The Surgical Strike Unit series about a privately run special operations group, she has set her new series WAR in West Africa, where she lived for a time.

When she's not writing, listening to music, or playing puzzle games on her mobile device, Vanessa writes the occasional Tech Talk column for her local RWA chapter's newsletter and takes long hikes in the nearby hills.

For more about Vanessa and...