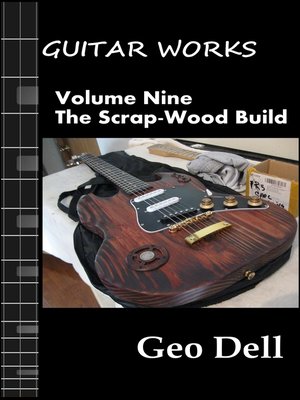 I started this build about a year ago and then left it. I originally intended to build a seven string slim bodied guitar, but I lost enthusiasm for it when I realized I would probably rarely play it. I hate building guitars that just sit. Guitars are made to be played.
When I built the Acoustic Seven string Jazz guitar I used a donor acoustic as the base. That acoustic had a bad neck set and at the conclusion of that project I came across that neck which had come off the acoustic body with little damage and decided that now that it was off the body it should be recycled. So I began this scrap wood build with only a neck that I was reluctant to throw away and a body blank I had made from some recycled roof rafters and abandoned for a year. I looked over the drawers in my shop cabinets and decided I could pull enough parts together to do the build that would save that orphaned guitar neck and body blank. And that is how the Scrap Wood project began.

I am a published author of three series, The Zombie Plagues, Genesis Earth and Guitar Works. I am a guitarist and a luthier. I have authored Guitar Repair books as well as novels and mainline fiction. And I have built several guitars for myself as...

More about Geo Dell
Guitar Works Volume Nine
Copy and paste the code into your website.
New here? Learn how to read digital books for free