The Day the Sun Died 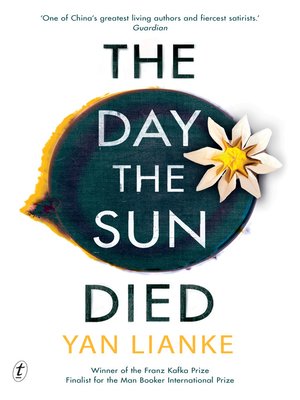 One dusk in early June, in a town deep in the Balou mountains, fourteen-year-old Li Niannian notices something strange about his town. Instead of settling down for the night, the residents start appearing in the streets and fields. There are people everywhere.

Li Niannian watches, mystified. But then he realises the people are dreamwalking, carrying on with their daily business as if the sun hadn't gone down. And before too long, as more and more people succumb, in the black of night all hell breaks loose.

Set over the course of one night, The Day the Sun Died sets chaos and darkness against the sunny optimism of the 'Chinese dream' promoted by President Xi Jinping. We are thrown into the middle of an increasingly strange and troubling waking nightmare as Li Niannian and his father struggle to save the town, and persuade the sun to rise again.

Yan Lianke was born in 1958 in Henan Province, China. Text has published his novels Serve the People!, Lenin's Kisses, Dream of Ding Village, The Four Books, The Explosion Chronicles and The Years, Months, Days. Yan Lianke won the Hua Zhong World Chinese Literature Prize in 2013. He has also won two of China's most prestigious literary awards: the Lu Xan Prize and the Lao She Award. In 2014, he won the Franz Kafka Prize. He lives in Bejing.

'I can think of few better novelists than Yan, with his superlative gifts for storytelling and penetrating eye for truth' New York Times Book Review

'This exuberant but sinister fable confirms its author as one of China's most audacious and enigmatic novelists.' Economist

Yan Lianke is one of the best contemporary Chinese writers.' Independent

'A master of imaginative satire. His work is animated by an affectionate loyalty to his peasant origins in the poverty-stricken province of Henan, and fierce anger over the political abuses of the regime.' Guardian

'Yan Lianke well deserves to be in the Pantheon of great writers. He has no equal at attacking societal issues or the great Maoist myths in order to turn them into novels so breathtakingly powerful, shot through with black, often desperate, humor.' Le Monde Diplomatique