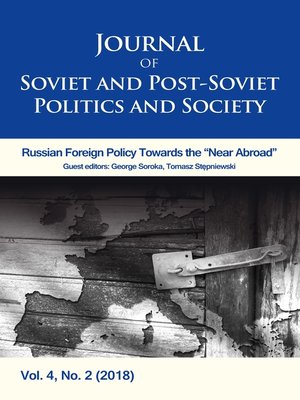 Journal of Soviet and Post-Soviet Politics and Society

Issue 4.2 deals with Russia's post-Maidan foreign policy towards the so-called "near abroad," or the former Soviet states. This is an important and timely topic, as Russia's policy perspectives have changed dramatically since 2013-2014, as have those of its neighbors. The Kremlin today is paradoxically following an aggressive "realist" agenda that seeks to clearly delineate its sphere of influence in Europe and Eurasia while simultaneously attempting to promote "soft power" and a historical-civilizational justification for its recent actions in Ukraine (and elsewhere). The result is an often perplexing amalgam of policy positions that are difficult to disentangle. The contributors to this special issue are all regional specialists based either in Europe or the United States.

Journal of Soviet and Post-Soviet Politics and Society
Copy and paste the code into your website.
New here? Learn how to read digital books for free