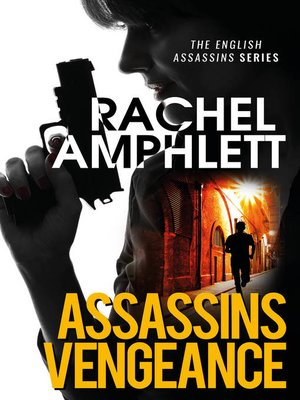 Spies. The best unreliable narrators that money can buy...

Eva and her fractured team are on the run, desperate to find answers and uncover who has betrayed them from within the shadowy government organisation known only as the Section.

Evading assassination in Berlin and Prague, Eva has had time to regroup and try to solve the mystery behind the attempts on her life.

But her enemies are one step ahead of her, eliminating anything and anyone who stands in their way.

Hell hath no fury like a woman who's been shot at and survived... twice

Assassins Vengeance is the second episode in a serialised story featuring Eva Delacourt. The story is concluded in episode 3 of the English Spy Mysteries, Assassins Retribution.

About the English Assassins series

The English Assassins series is a new concept by acclaimed crime thriller author, Rachel Amphlett. Books 1-3 of these fast-paced thrilling reads were originally published in episodic delivery in the vein of TV shows 24, Alias, and Spooks, and are a must-read for fans of Robert Ludlum, Vince Flynn, and Killing Eve's Luke Jennings.

The English Assassins series book 1-3 collection is also available as a paperback and large print omnibus.

Praise for the English Assassins series:

"With the Assassins series, Rachel Amphlett proves her mastery of the fast-paced action thriller. Get ready for a hell of a ride." ~ Zoe Sharp, author of the bestselling Charlie Fox series

"Gives Bond, Bourne and the others a run for their money." ~ Goodreads

"This is a story that will totally grip you, keep you reading and leave you breathless and desperate for more!" ~ It's All About the Books

"This has everything you'd expect from a gripping spy thriller and once again proves the author is a fantastic thriller writer!" ~ Goodreads

"Begins with a bang – literally – and the action doesn't let up." ~ Goodreads

"Rachel Amphlett is an author in her own right as formidable a spinner of taut action thrillers as any you ever may have encountered...and put them to shame" ~ Goodreads

"Amphlett has the reader on the edge of their seat never quite knowing what will happen next. The story has plenty of action and some great twists." ~ The Burgeoning Bookshelf

"I'm a long-time fan of Robert Crais and Lee Child, and now I'm a fan of Rachel Amphlett. When she publishes a new one I buy it...don't even read the reviews anymore. This author knows how to spin a thriller tale." ~ Goodreads

Assassins Vengeance
Copy and paste the code into your website.
New here? Learn how to read digital books for free