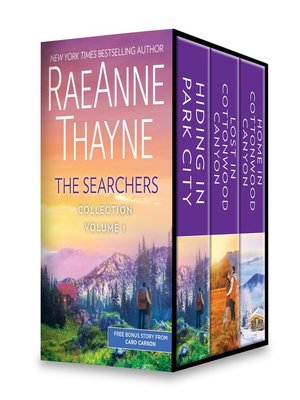 FictionLiteratureRomanceSuspense
New York Times bestselling author RaeAnne Thayne brings her trademark warmth and tenderness to these thrilling romantic stories in The Searcher series
Hiding in Park City
As an on-the-run single mother out to protect her daughters, Lisa Connors needs two things: money, and to keep her identity secret. But the possibility of the former threatens the latter: as the caretaker of the hunk-next-door with two broken legs, her ability to keep her distance is shaky. When she finds out said hunk's profession—FBI agent—it's downright demolished....
Gage McKinnon spent most of his life trying to keep away from all things familial, so the last thing he needs is to have two adorable little girls take root next door. But it's their mother who poses his greatest threat. For with Lisa he feels that door in his heart—the one that slammed shut twenty-five years ago—start to open, just a crack.
Originally published in 2003 as Nothing to Hide
Lost in Cottonwood Canyon
Crime expert Wyatt McKinnon built his career by turning high-profile cases into bestsellers. His most recent project—investigating the murders that landed a detective on death row—reunites him with Taylor Bradshaw, the inmate's fiercely protective sister. Wyatt plans to help her exonerate her convicted sibling.
Wyatt insists his attraction to the captivating redhead won't distract him, but he does concede that the recent attempts on Ms. Bradshaw's life have caused unexpected emotional complications.
Originally published in 2004 as Nothing to Lose
Home in Cottonwood Canyon
For all their obvious differences, medical resident Kate Spencer and recently freed—though-wrongly-imprisoned—Hunter Bradshaw have one big thing in common: both of them have holes in their past they were sure could never be filled. So when Kate, née Charlotte McKinnon, announces her plan to take a road trip to find clues to her real identity, ex-cop Hunter offers to go along for the ride. Only for protection, of course.
But there's where their trip took an unexpected turn. For Kate, who'd loved Hunter from afar for years, found no answers, only more questions. And Hunter, with Kate by his side, saw that even though yesterday might be murky, today was dawning clear and bright.
Originally published in 2005 as Never Too Late
FREE BONUS STORY!
How to Train a Cowboy
A cowgirl desperate to prove herself takes a Marine under her wing in this heartwarming story by USA TODAY bestselling author Caro Carson
Though Marine Benjamin Graham doesn't know the first thing about ranching, his new job is the lifeline he desperately needs. Without the help of feisty cowgirl Emily Davis, though, he's lost—in more ways than one. Even if the world is Emily's oyster, all she's ever wanted is the family ranch. And Graham is taking her dreams of running the ranch more seriously than anyone else. As they grow closer during hot days—and nights—working the range, Emily starts to think that maybe the ranch is only a piece of her dream...
Originally published in 2016
FictionLiteratureRomanceSuspense

Despite a no-nonsense background as a West Point graduate, Army officer, and Fortune 100 sales executive, Caro Carson has always treasured the happily-ever-after of a good romance novel. As a Rita-winning Harlequin author, Caro is delighted to be ...