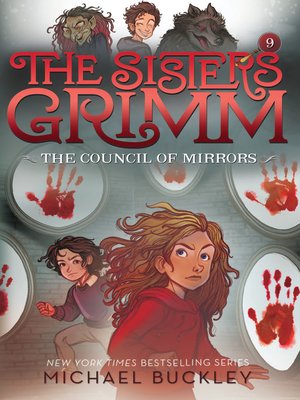 The Council of Mirrors

Fans of fractured fairy tales will be delighted to discover the fantasy, mystery, adventure, and humor in the beloved New York Times bestselling Sisters Grimm series by Michael Buckley, now with new cover art. As featured on NBC's The Today Show, the nine wildly popular books are favorites around the world. They were among the first books to bring a distinctly girl-power spin to fairy tales—a spin taken up by hit TV shows such as Grimm and Once Upon a Time, the bestselling book series The Land of Stories, and more.

In the final adventure of the Sisters Grimm series, Sabrina and Daphne, along with their family and friends must face off against the Master to decide the fate of Ferryport Landing—and the world. When Mirror's plan to use Granny Relda's body to escape the magical barrier fails, he turns to plan B: killing all the Grimms so that the barrier collapses. In the meantime, Sabrina gathers the other magic mirrors to advise on how to deal with their mortal enemy. They tell her to join forces with the Scarlet Hand against Mirror, in exchange for offering all the citizens of Ferryport Landing their freedom.

More about Michael Buckley
The Council of Mirrors
Copy and paste the code into your website.
New here? Learn how to read digital books for free