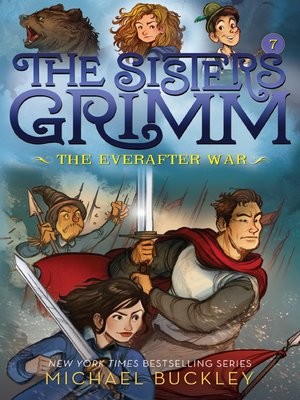 Fans of fractured fairy tales will be delighted to discover the fantasy, mystery, adventure, and humor in the beloved New York Times bestselling Sisters Grimm series by Michael Buckley, now with new cover art. As featured on NBC's The Today Show, the nine wildly popular books are favorites around the world. They were among the first books to bring a distinctly girl-power spin to fairy tales—a spin taken up by hit TV shows such as Grimm and Once Upon a Time, the bestselling book series The Land of Stories, and more.

In Book 7, Sabrina and Daphne's prayers are finally answered when their parents awake from their sleeping spell. But their celebration is short-lived, as they are caught in the middle of a war between the Scarlet Hand and Prince Charming's Everafter army. As the family works to help the prince's ragtag group of rebels fight against their deadliest enemies, Sabrina comes face-to-face with the leader of the Scarlet Hand—the mysterious Master—who reveals a secret so shocking it will rock the entire family to its core.

More about Michael Buckley
The Everafter War
Copy and paste the code into your website.
New here? Learn how to read digital books for free