The Splendor Before the Dark

audiobook (Unabridged) ∣ A Novel of the Emperor Nero 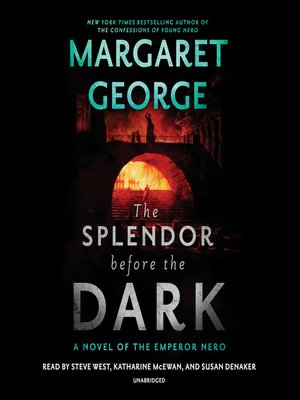 View more libraries...
Nero's ascent to the throne was only the beginning....Now Margaret George, the author of The Confessions of Young Nero, weaves a web of politics and passion, as ancient Rome's most infamous emperor cements his place in history.
With the beautiful and cunning Poppaea at his side, Nero commands the Roman empire, ushering in an unprecedented era of artistic and cultural splendor. Although he has yet to produce an heir, his power is unquestioned.
But in the tenth year of his reign, a terrifying prophecy comes to pass and a fire engulfs Rome, reducing entire swaths of the city to rubble. Rumors of Nero's complicity in the blaze start to sow unrest among the populace—and the politicians....
For better or worse, Nero knows that his fate is now tied to Rome's—and he vows to rebuild it as a city that will stun the world. But there are those who find his rampant quest for glory dangerous. Throughout the empire, false friends and spies conspire against him, not understanding what drives him to undertake the impossible.
Nero will either survive and be the first in his family to escape the web of betrayals that is the Roman court, or be ensnared and remembered as the last radiance of the greatest dynasty the world has ever known.
"A resplendent novel filled with the gilt and marble of the ancient world."—C. W. Gortner, author of The Romanov Empress

Fiction Literature Historical Fiction
The Splendor Before the Dark