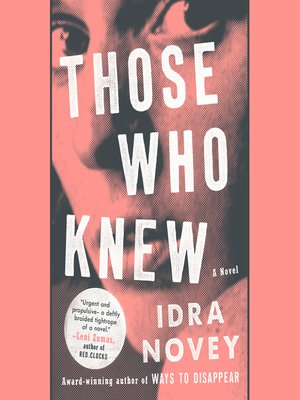 FictionLiterature
"Read this now, because everyone you know will be talking about it by early 2019." —Washington Post
From the award-winning author of Ways to Disappear, a taut, timely novel about what a powerful politician thinks he can get away with and the group of misfits who finally bring him down.
On an unnamed island country ten years after the collapse of a U.S.-supported regime, Lena suspects the powerful senator she was involved with back in her student activist days is taking advantage of a young woman who's been introducing him at rallies. When the young woman ends up dead, Lena revisits her own fraught history with the senator and the violent incident that ended their relationship.

Why didn't Lena speak up then, and will her family's support of the former regime still impact her credibility? What if her hunch about this young woman's death is wrong?
What follows is a riveting exploration of the cost of staying silent and the mixed rewards of speaking up in a profoundly divided country. Those Who Knew confirms Novey's place as an essential new voice in American fiction.
FictionLiterature

IDRA NOVEY is the author of the novel Ways to Disappear, winner of the Sami Rohr Prize, the Brooklyn Eagles Prize, and a finalist for the Los Angeles Times Book Prize for First Fiction. Her work has been translated into ten languages and she's wri...

More about Idra Novey
Those Who Knew
Copy and paste the code into your website.
New here? Learn how to read digital books for free