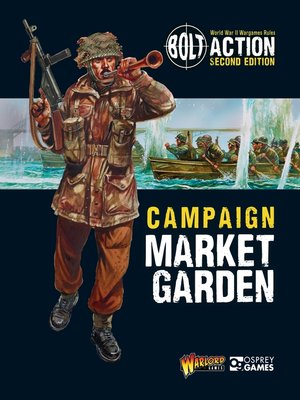 Market Garden was a bold plan, designed to capture the Rhine crossings along the Dutch–German border and establish a foothold for an advance into Germany. A massive combined arms operation involving airborne landings and an armoured thrust, it was one of the most dramatic and controversial operations of the war. This new Campaign Book for Bolt Action allows players to command the forces facing each other across the Rhine, fighting key battles and attempting to change the course of history. New, linked scenarios, rules, troop types and Theatre Selectors provide plenty of options for novice and veteran players alike.

Warlord Games is one of the world's leading producers of wargaming miniatures, as well as the publisher of the successful Black Powder and Hail Caesar rule sets. Their Bolt Action range of 28mm World War II miniatures is the most extensive on the ...

More about Warlord Games
Campaign: Market Garden
Copy and paste the code into your website.
New here? Learn how to read digital books for free