ebook ∣ Econometrics In the Information Age: Theory and Practice of Measurement 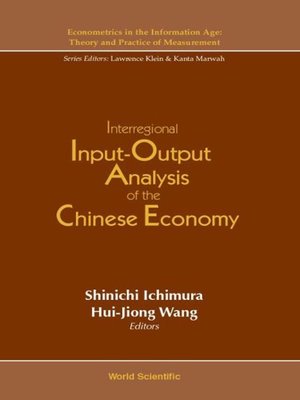 View more libraries...
This book presents pioneering work on an interregional input-output table of the Chinese economy and its applications to the analysis of interregional and interindustrial relations in China. It is the fruit of the authors' joint efforts of more than five years to establish a solid basis for the analysis of interregional relations in China, in the hope of laying the foundation for further studies of regional development in that country.The book endeavors to make a contribution to the regional typology of the Chinese economy. The Chinese provinces are classified into seven large regions. The interregional input-output table is constructed accordingly.Chapter I describes the methodology for producing this interregional input-output (IRIO) table. Chapter II presents the (IRIO) table after a brief explanation of the Chinese statistical data needed for the compilation of the table. Chapter III explains the basis of seven large regions adopted for the IRIO table. Chapter IV deals with the interdependence of regions and the effects of the changes in some parameters of one region on the activities in other regions. Chapter V, the last chapter, applies the IRIO table to policy analysis.