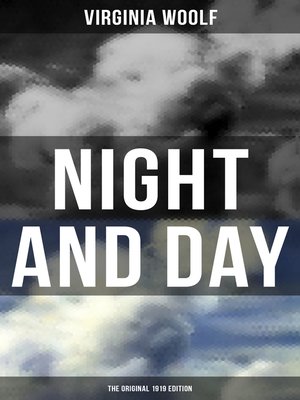 NIGHT AND DAY (The Original 1919 Edition)

Classic LiteratureFiction
Set in Edwardian London, Night and Day contrasts the daily lives and romantic attachments of two acquaintances, Katharine Hilbery and Mary Datchet. The novel examines the relationships between love, marriage, happiness, and success. Adeline Virginia Woolf (25 January 1882 – 28 March 1941) was an English writer, and one of the foremost modernists of the twentieth century. During the interwar period, Woolf was a significant figure in London literary society and a central figure in the influential Bloomsbury Group of intellectuals. Her most famous works include the novels Mrs Dalloway (1925), To the Lighthouse (1927) and Orlando (1928), and the book-length essay A Room of One's Own (1929), with its famous dictum, "A woman must have money and a room of her own if she is to write fiction."
Classic LiteratureFiction

NIGHT AND DAY (The Original 1919 Edition)
Copy and paste the code into your website.
New here? Learn how to read digital books for free