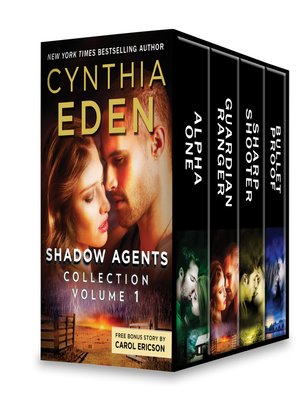 FictionRomanceSuspenseThriller
Four books in one value edition from New York Times bestselling author Cynthia Eden's classic Harlequin Intrigue series SHADOW AGENTS.
Alpha One
Elite Ops covert agent Logan Quinn's only priority is getting Juliana James out of Mexico alive. His personal mission is to have another chance with the woman he can't lose again.
Guardian Ranger
Desperate to find her missing brother, sheltered computer programmer Veronica Lane must turn to soldier-turned-elite-ops-agent Jasper Adams—the man she'd been warned to stay far away from. What will happen once Veronica discovers everything about him is a lie...everything except his passion for her?
Sharpshooter
Two years ago Gunner Ortez saved Sydney Sloan's life on a mission gone wrong. Ever since then, he's been watching her back. Now a hostage-rescue mission is about to blow the Elite Ops agents' lives apart once again. But it's not just their lives on the line anymore.
Bulletproof (originally published in 2013 as Glitter and Gunfire)
Former Army Ranger Cale Lane had his orders: keep Cassidy Sherridan alive at all costs. But who sent six armed men storming the Rio ballroom to take her out? The gorgeous party girl wasn't giving it up. Now he had a more urgent mission: uncover Cassidy's secrets...one by one.
FREE BONUS STORY INCLUDED IN THIS VOLUME!
Enjoy LOCKED, LOADED AND SEALED by Carol Ericson from her RED, WHITE AND BUILT series!
The SEAL's secret assignment had been to protect a certain important doctor. But when the man is murdered, Austin Foley's mission changes. The navy sniper must now protect the doctor's protégé the irresistible Sophia Grant, at any cost. There's only one problem: Sophia has no idea what those secrets she holds.
FictionRomanceSuspenseThriller

Cynthia Eden is a New York Times and USA Today best-selling author. She writes dark tales of romantic suspense and paranormal romance. Her books have received starred reviews from Publishers Weekly, and was named a 2013 RITA® finalist for best rom...

Carol Ericson lives in southern California, home of state-of–the-art cosmetic surgery, wild freeway chases, and a million amazing stories. These stories, along with hordes of virile men and feisty women clamor for release from Carol's head until s...