The Cultural Nature of Attachment 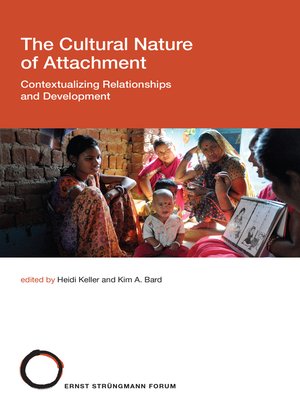 Multidisciplinary perspectives on the cultural and evolutionary foundations of children's attachment relationships and on the consequences for education, counseling, and policy.

It is generally acknowledged that attachment relationships are important for infants and young children, but there is little clarity on what exactly constitutes such a relationship. Does it occur between two individuals (infant–mother or infant–father) or in an extended network? In the West, monotropic attachment appears to function as a secure foundation for infants, but is this true in other cultures? This volume offers perspectives from a range of disciplines on these questions. Contributors from psychology, biology, anthropology, evolution, social policy, neuroscience, information systems, and practice describe the latest research on the cultural and evolutionary foundations on children's attachment relationships as well as the implications for education, counseling, and policy.

The contributors discuss such issues as the possible functions of attachment, including trust and biopsychological regulation; the evolutionary foundations, if any, of attachment; ways to model attachment using the tools of information science; the neural foundations of attachment; and the influence of cultural attitudes on attachment. Taking an integrative approach, the book embraces the wide cultural variations in attachment relationships in humans and their diversity across nonhuman primates. It proposes research methods for the culturally sensitive study of attachment networks that will lead to culturally sensitive assessments, practices, and social policies.