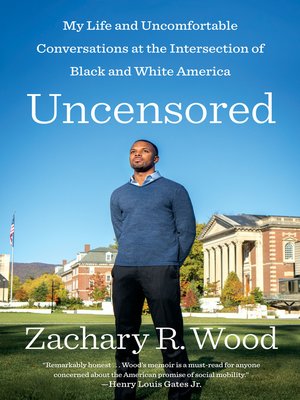 Biography & AutobiographySociologyNonfiction
Drawing upon his own powerful personal story, Zachary Wood shares his perspective on free speech, race, and dissenting opinions—in a world that sorely needs to learn to listen.
As the former president of the student group Uncomfortable Learning at his alma mater, Williams College, Zachary Wood knows from experience about intellectual controversy. At school and beyond, there's no one Zach refuses to engage with simply because he disagrees with their beliefs—sometimes vehemently so—and this view has given him a unique platform in the media.
But Zach has never shared the details of his own personal story. In Uncensored, he reveals for the first time how he grew up poor and black in Washington, DC, where the only way to survive was resisting the urge to write people off because of their backgrounds and perspectives. By sharing his troubled upbringing—from a difficult early childhood to the struggles of code-switching between his home and his elite private school—Zach makes a compelling argument for a new way of interacting with others and presents a new outlook on society's most difficult conversations.
Biography & AutobiographySociologyNonfiction

Uncensored
Copy and paste the code into your website.
New here? Learn how to read digital books for free