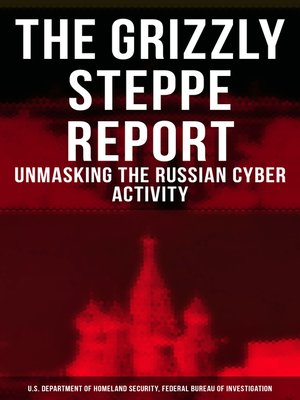 by U.s. Department Of Homeland Security, Federal Bureau Of Investigation

Computer TechnologyPoliticsNonfiction
This analysis report provides information and gives insight into the activities of the Russian civilian and military intelligence Services (RIS) conducted during the 2016 U.S. presidential election campaign. The Grizzly Steppe Report provides details regarding the tools and hacking techniques used by the Russian hackers in order to interfere the 2016 U.S. elections. This activity by RIS is just part of an ongoing campaign of cyber-enabled operations directed at the U.S. government and its citizens. These cyber operations have included spearphishing campaigns targeting government organizations, critical infrastructure entities, think tanks, universities, political organizations, and corporations leading to the theft of information. In foreign countries, RIS actors conducted damaging and/or disruptive cyber-attacks, including attacks on critical infrastructure networks. In some cases, RIS actors masqueraded as third parties, hiding behind false online personas designed to cause the victim to misattribute the source of the attack. This report provides technical indicators related to many of these operations, recommended mitigations, suggested actions to take in response to the indicators provided, and information on how to report such incidents to the U.S. Government.
Computer TechnologyPoliticsNonfiction

THE GRIZZLY STEPPE REPORT (Unmasking the Russian Cyber Activity)
Copy and paste the code into your website.
New here? Learn how to read digital books for free