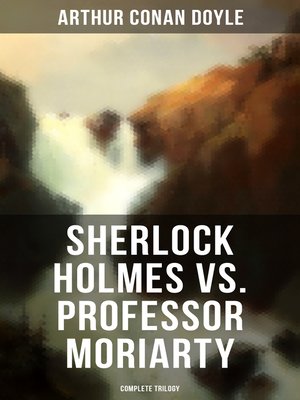 Tales of the World's Most Famous Detective and His Archenemy

Classic LiteratureYoung Adult Fiction
"The Valley of Fear" – Holmes gets led to Moriarty by his perception that many of the crimes he investigated were not isolated incidents, but instead the machinations of a vast and subtle criminal ring. One of Moriarty's agents sends cipher to Holmes, but doesn't give him the key. Holmes manages to decipher the message and must prevent Moriarty's agents from committing a murder. "The Final Problem" – Holmes is on the verge of delivering a fatal blow to Moriarty's criminal ring, but is forced to flee to continental Europe to escape Moriarty's retribution. The criminal mastermind follows, and the pursuit ends on top of the Reichenbach Falls, where the two are involved in a deadly struggle. "The Adventure of the Empty House" – Watson bumps into a wizened old book collector, who follows him home to his Kensington practice study then drops his disguise – it is Holmes. Holmes tells him how he beat Moriarty and apologizes for the deception needed to outwit his enemies. Professor James Moriarty is a criminal mastermind whom Holmes describes as the "Napoleon of crime" and considers him his archenemy. Moriarty is a crime lord who protects nearly all of the criminals of England in exchange for their obedience and a share in their profits. Arthur Conan Doyle (1859-1930) was a British writer best known for his detective fiction featuring the character Sherlock Holmes. Doyle is also known for writing the fictional adventures of Professor Challenger and for propagating the mystery of the Mary Celeste. He was a prolific writer whose other works include fantasy and science fiction stories, plays, romances, poetry, non-fiction and historical novels.
Classic LiteratureYoung Adult Fiction

Sherlock Holmes vs. Professor Moriarty--Complete Trilogy
Copy and paste the code into your website.
New here? Learn how to read digital books for free