A History of African Higher Education from Antiquity to the Present 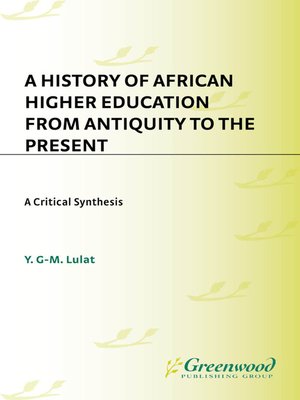 Until recently, Eurocentrist history professors taught that it was the Europeans who brought higher education to the African continent. While the Europeans have indeed influenced African education in recent times, there is some vital information that most history books leave out: for centuries before the arrival of the Europeans, the vast and advanced native African civilizations already had sophisticated universities and other institutions of higher education to boast about. This book is an attempt to fill the chasm in today's literature regarding this topic. It will be of interest to those researching the accurate, non-Euro-biased history of Africa.

This book surveys the history of higher education—principally universities—in Africa. Its geographical coverage encompasses the entire continent, from Afro-Arab Islamic Africa in the north to the former apartheid South Africa in the south, and the historical time span ranges from the Egyptian civilization to the present. Since little has been written on this topic, particularly its historical component, the work fills an important gap in the literature. The book delineates the broad contours of the history of higher education in Africa in exceptional historical breadth, voluminously documenting its subject in the text, detailed footnotes, and lengthy appendices. Its methodological approach is that of critical historiography in which the location of the African continent in world history, prior to the advent of European colonization, is an important dimension. In addition, the book incorporates a historical survey of foreign assistance to the development of higher education in Africa in the post-independence era, with a substantive focus on the role of the World Bank. It has been written with the following readership in mind: those pursuing courses or doing research in African studies, studies of the African Diaspora, and comparative/international education. It should also be of interest to those concerned with developing policies on African higher education inside and outside Africa, as well as those interested in African Islamic history, the development of higher education in medieval Europe, the contributions of African Americans to African higher education, and such controversial approaches to the reading of African history as Eurocentrism and Afrocentrism.