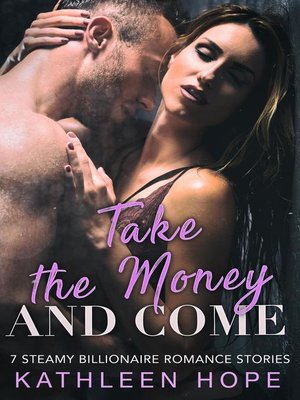 Take the Money and Come

"I'm never going to date again!" Sarah swore vehemently, standing in the middle of their hotel room, objecting to her best friend Callie's insistence on a "girl's night out." "I'm going to join a nunnery, stave off men altogether. So I most certainly have no interest in hanging out at a bar where there will be scumbags aplenty," she insisted petulantly.

It really wasn't all men that Sarah was exasperated with, but rather the string of men she'd managed to attract who should have come with warning signs, like "Scumbag King," "Super Sloth," or "Lying, Cheating Dirt-bag."

"I'm not trying to find you a husband, Sarah...just a good lay. Or hell, a little flirting is fine with me," Callie explained patiently. "You've been out of the game for months now. And I get it, you had some bad luck. But, it's time to get back on the horse—at least long enough to take one out for a ride."

Bad luck was an understatement in Sarah's opinion. In the past three years since graduating from college, she'd wound up dating a gambler who had maxed out her credit cards behind her back, and a deadbeat who, it turned out, was not a video game designer as he had said, but rather a fanatical video game player. The latest in her string of "bad luck," a  compulsive cheater who couldn't keep it in his pants—even in the midst of her twenty-fifth birthday celebration. She'd darted off to her bedroom to look for a sweater and ended up finding her sister riding her boyfriend like he was a bucking stallion...

Kathleen Hope is a steamy romance author who has a passion with all things romantic. She lives in California with her husband and three children. When she&#39

More about Kathleen Hope
Take the Money and Come
Copy and paste the code into your website.
New here? Learn how to read digital books for free