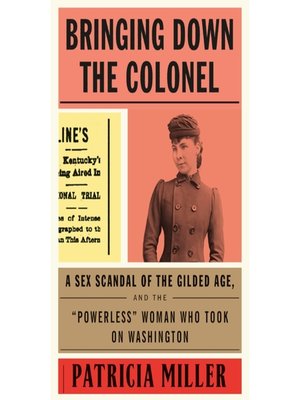 Bringing Down the Colonel

A Sex Scandal of the Gilded Age, and the "Powerless" Woman Who Took On Washington

"I'll take my share of the blame. I only ask that he take his."

In Bringing Down the Colonel, journalist Patricia Miller tells the story of Madeline Pollard, an unlikely nineteenth-century women's rights crusader. After an affair with a prominent politician left her "ruined," Pollard brought the man—and the hypocrisy of America's control of women's sexuality—to trial. And, surprisingly, she won.

Pollard and the married Colonel Breckinridge began their decade-long affair when she was just a teenager. After the death of his wife, Breckinridge asked for Pollard's hand—and then broke off the engagement to marry another woman. But Pollard struck back, suing Breckinridge for breach of promise in a shockingly public trial. With premarital sex considered irredeemably ruinous for a woman, Pollard was asserting the unthinkable: that the sexual morality of men and women should be judged equally.

Nearly 125 years after the Breckinridge-Pollard scandal, America is still obsessed with women's sexual morality. And in the age of Donald Trump and Harvey Weinstein, we've witnessed fraught public reckonings with a type of sexual exploitation unnervingly similar to that experienced by Pollard. Using newspaper articles, personal journals, previously unpublished autobiographies, and letters, Bringing Down the Colonel tells the story of one of the earliest women to publicly fight back.

Christina Delaine is a SOVAS Voice Arts Award and multiple AudioFile Earphones Award-winning narrator who has recorded over 100 audiobooks. She is also an Audie Award nominee. An accomplished stage and voice actor, Delaine has appeared on stages a...

More about Patricia Miller
Bringing Down the Colonel
Copy and paste the code into your website.
New here? Learn how to read digital books for free