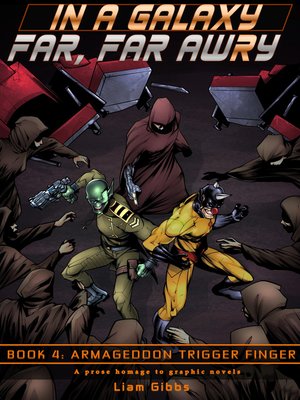 FictionLiteratureScience Fiction
What's a guy gotta do to get a break around here?Legion is invited to speak at the Intergalactic Peace Symposium, a conference based around military response, as a last-minute presenter, to showcase the accomplishments of the Good Guys.Much to Legion's irritation, work follows him wherever he goes when Master Asinine and his typical enclave of idiots make an appearance in the hopes of capturing and cloning the Good Guy leader. For some stupid reason.But when Legion and Asinine are joined by a mysterious third faction hell-bent on destroying the universe, the two must put aside their differences to stop the shadowy cloaked figures. And just who is this Lord Alpha who sent them anyway?Absolute hijinks ensue—or at least percolate—in this newest installment of the In a Galaxy Far, Far AwRy series! So get reading! But take a break around lunch.
FictionLiteratureScience Fiction

More about Liam Gibbs
In a Galaxy Far, Far AwRy book 4
Copy and paste the code into your website.
New here? Learn how to read digital books for free