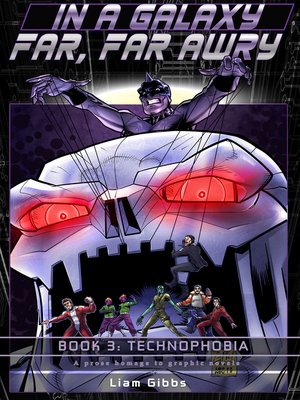 FictionScience FictionHumor (Fiction)
No one told Master Asinine that disco is dead.Master Asinine has a new scheme up his pants: take control of the Good Guys' space station by usurping its controlling software, the haunt control. His method of attack? The word-jumbling Scapegoat and the buffet-bingeing Multipurpose.When Scapegoat and Multipurpose install Asinine's new Haunt-Control Control, it wreaks havoc: public-access lyrics to the tune of disco beats. Oh, and attempted murder. Now Good Guys Ace Spandex and Smithereens must find a way to shut it down.To boot, the captive Schizophrenic escapes Good Guy lockup. All this while Legion needs to impress investors whose money will ensure that the Good Guys continue operation. Not easy when Schizophrenic takes him hostage.How will the Good Guys deal with the enemy...when the enemy is their own home?
FictionScience FictionHumor (Fiction)

More about Liam Gibbs
In a Galaxy Far, Far AwRy book 3
Copy and paste the code into your website.
New here? Learn how to read digital books for free