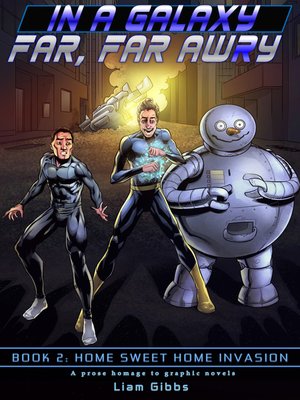 FictionScience FictionHumor (Fiction)
So asking where to find the restroom is out of the question?When Power Plant and Franchise's starship crash-lands on the Bad Guys' new home turf, a simple mission goes from routine observe-and-report duty to straight-up survival. And their pilot, a robot with a vocal processor built from car alarms, doesn't make hiding any easier whenever it decides to speak its mind at 120 decibels.Can Power Plant and Franchise outwit Master Asinine's hunting party long enough for Legion and Burnout to mount a rescue operation? Or will the hunting party execute them before Power Plant runs out of stuff to break? Did Power Plant even brush his teeth before he left the house?It's a race between life and death...with a robot who has no inside voice!Okay, I seem to remember Power Plant brushing his teeth this morning, so that's one problem solved.
FictionScience FictionHumor (Fiction)

More about Liam Gibbs
In a Galaxy Far, Far AwRy book 2
Copy and paste the code into your website.
New here? Learn how to read digital books for free