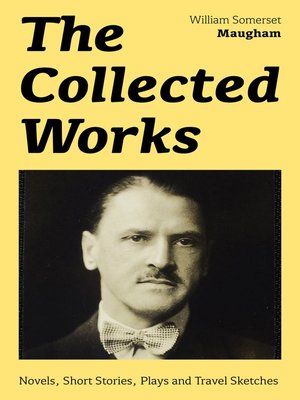 Novels, Short Stories, Plays and Travel Sketches: A Collection of 33 works by the prolific British writer, author of "The Painted Veil", "Up at the Villa", "Cakes and Ale", including "Of Human Bondage", "The Moon and the Sixpence" and "The Magician"

DramaFictionRomanceShort Stories
This carefully crafted ebook: "The Collected Works: Novels, Short Stories, Plays and Travel Sketches" is formatted for your eReader with a functional and detailed table of contents. William Somerset Maugham (1874 – 1965) was a British playwright, novelist and short story writer. He was among the most popular writers of his era and reputedly the highest paid author during the 1930s. Table of Contents: Novels: Liza of Lambeth (1897) The Making of a Saint (1898) The Hero (1901) Mrs Craddock (1902) The Merry-go-round (1904) The Bishop's Apron (1906) The Explorer (1908) The Magician (1908) The Canadian (The Land of Promise) (1914) Of Human Bondage (1915) The Moon and Sixpence (1919) Short Story Collections: Orientations (1899) The Punctiliousness of Don Sebastian A Bad Example De Amicitia Faith The Choice of Amyntas Daisy The Trembling of a Leaf: Little Stories of the South Sea Islands (1921) The Pacific Mackintosh The Fall of Edward Barnard Red The Pool Honolulu Rain Envoi Plays: A Man of Honour (1903) Lady Frederick (1912) The Explorer (1912) The Circle (1921) Caesar's Wife (1922) East of Suez (1922) Travel Sketches: The Land of the Blessed Virgin: Sketches and Impressions in Andalusia (1905) On a Chinese Screen (1922)
DramaFictionRomanceShort Stories

The Collected Works
Copy and paste the code into your website.
New here? Learn how to read digital books for free