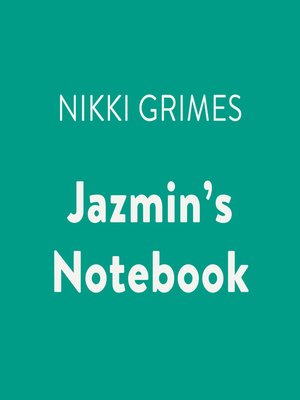 Juvenile FictionJuvenile Literature
Jazmin Shelby was "born with clenched fists"-which is okay, since she's got a lot of fighting ahead of her. Her dad died a couple of years back, and now that her mom's in the hospital, it's just her and her big sister, CeCe. But that's fine by Jazmin. She's got her friends, her school, lots of big plans for the future-and a zest for life and laughter that's impossible to resist.
A Coretta Scott King Honor Book
A Booklist Editors' Choice Book
A Child Study Children's Book Committee Children's Book of the Year
Juvenile FictionJuvenile Literature

Nikki Grimes is the award-winning, New York Times bestselling author of dozens of children's and young adult books as well as a poet and journalist. Among the many accolades she has received are the Golden Dolphin Award (2005),the NCTE Award for E...

More about Nikki Grimes
Jazmin's Notebook
Copy and paste the code into your website.
New here? Learn how to read digital books for free