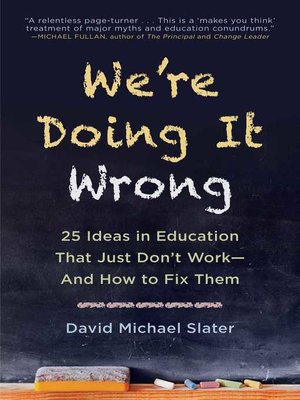 View more libraries...
An unapologetic critique of major flaws in the American education system.
David Michael Slater's We're Doing It Wrong is a thought-provoking dissection of the issues plaguing American public schools. Each chapter identifies a major problem in the education system, exploring its roots and repercussions. A teacher himself, Slater opens up and gives readers an insider's perspective on topics that have been at the center of ongoing debates as well as recent hot button issues, such as: Slater explains why our current approaches simply aren't working—for students, for teachers, for the colleges that these students may eventually attend, and for society at-large. Unafraid to ruffle a few feathers, We're Doing It Wrong highlights defects in policy and theory, calls out administration, and questions long-held beliefs. Every chapter concludes with a suggestion for improvement, offering light at the end of the tunnel. Administrators, teachers, and concerned parents will come away with a better understanding of the current state of education and ideas for moving toward progress—for themselves and for the students they support.