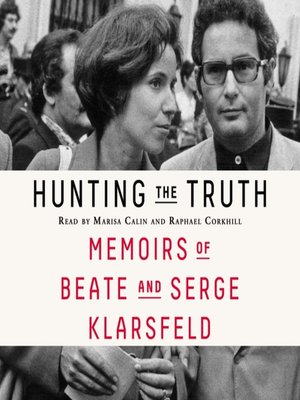 Memoirs of Beate and Serge Klarsfeld

*Winner of the 2018 National Book Award*

In this dual audiobook memoir, Beate and Serge Klarsfeld tell the dramatic story of fifty years devoted to bringing Nazis to justice

They were born on opposite sides of the Second World War: Beate grew up in the ruins of a defeated Weimar Germany, while Serge, a Jewish boy in France, was hiding in a cupboard when his father was arrested and sent to Auschwitz. They met on the Paris Métro and fell in love, and became famous when Beate slapped the face of the West German chancellor—a former Nazi—Kurt Georg Kiesinger.

For the past half century, Beate and Serge Klarsfeld have hunted, confronted, prosecuted, and exposed Nazi war criminals all over the world, tracking down the notorious torturer Klaus Barbie in Bolivia and attempting to kidnap the former Gestapo chief Kurt Lischka on the streets of Cologne. They have been sent to prison for their beliefs and have risked their lives protesting anti-Semitism behind the Iron Curtain in South America and in the Middle East. They have been insulted and exalted, assaulted and heralded; they've received honors from presidents and letter bombs from neo-Nazis. They have fought relentlessly not only for the memory of all those who died in the Holocaust but also for modern-day victims of genocide and discrimination across the world. And they have done it all while raising their children and sustaining their marriage.

Now, for the first time, in Hunting the Truth, a major memoir spoken in their alternating voices, Beate and Serge Klarsfeld tell the thrilling story of a lifetime dedicated to combating evil.

Beate and Serge Klarsfeld are French activists, journalists, and renowned Nazi hunters whose work apprehending war criminals, seeking justice for victims and survivors of war crimes, and establishing the record of the Holocaust have brought them i...

Hunting the Truth
Copy and paste the code into your website.
New here? Learn how to read digital books for free