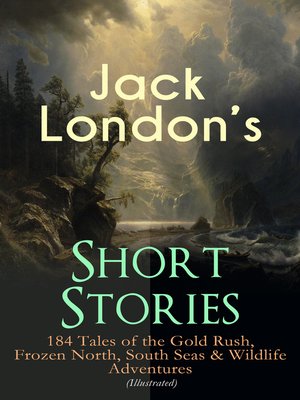 184 Tales of the Gold Rush, Frozen North, South Seas & Wildlife Adventures (Illustrated): Son of the Wolf, Children of the Frost, Tales of the Fish Patrol, South Sea Tales, Smoke Bellew, The Night Born, An Odyssey of the North, The Turtles of Tasman,

FantasyFictionShort Stories
This carefully crafted ebook collection is formatted for your eReader with a functional and detailed table of contents: A Son of the Sun The Proud Goat of Aloysius Pankburn The Devils of Fuatino The Jokers of New Gibbon A Little Account With Swithin Hall A Goboto Night The Feathers of the Sun The Pearls of Parlay Son of the Wolf The White Silence The Son of the Wolf The Men of Forty Mile In a Far Country To the Man on the Trail The Priestly Prerogative The Wisdom of the Trail The Wife of a King An Odyssey of the North The God of His Fathers: Tales of the Klondike The God of His Fathers The Great Interrogation Which Make Men Remember Siwash The Man with the Gash Jan, the Unrepentant Grit of Women Where the Trail Forks A Daughter of the Aurora At the Rainbow's End The Scorn of Women Children of the Frost In the Forests of the North The Law of Life Nam-Bok the Unveracious The Master of Mystery The Sunlanders The Sickness of Lone Chief Keesh, the Son of Keesh The Death of Ligoun Li Wan, the Fair The League of the Old Men The Faith of Men A Relic of the Pliocene A Hyperborean Brew The Faith of Men Too Much Gold The One Thousand Dozen The Marriage of Lit-lit Bâtard The Story of Jees Uck Tales of the Fish Patrol White and Yellow The King of the Greeks A Raid on the Oyster Pirates The Siege of the "Lancashire Queen" Charley's Coup Demetrios Contos Yellow Handkerchief Moon-Face Love of Life Lost Face South Sea Tales When God Laughs The House of Pride & Other Tales of Hawaii Smoke Bellew The Night Born The Strength of the Strong The Turtles of Tasman ... Jack London (1876-1916) was an American novelist, journalist, and social activist. His amazing life experience also includes being an oyster pirate, railroad hobo, gold prospector, sailor, war correspondent and much more. He wrote adventure novels & sea tales, stories of the Gold Rush, tales of the South Pacific and the San Francisco Bay area - most of which were based on or inspired by his own life experiences.
FantasyFictionShort Stories

Jack London's Short Stories
Copy and paste the code into your website.
New here? Learn how to read digital books for free