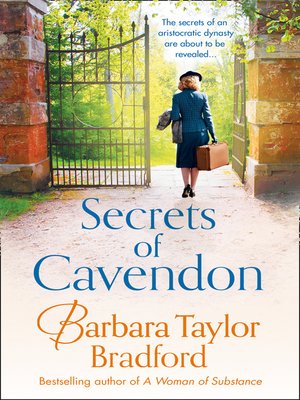 FictionLiterature
'A glamorous read packed with period detail...strong women are centre stage' Daily Mail The secrets of an aristocratic dynasty are about to be revealed... The year is 1949. And at Cavendon Hall, a Yorkshire stately home, the Second World War has exacted a terrible price and the estate is facing bankruptcy. The aristocratic Ingham family is at odds with its loyal retainers, the Swanns, for the first time. And when Cavendon's secrets start to rise to the surface, young and old alike are threatened. Can the generations unite to save the family name and their future?
FictionLiterature

Barbara Taylor Bradford was born and raised in Leeds, and worked as a journalist in London. Her first novel, A Woman of Substance, is one of the bestelling novels of all time and Barbara's books have sold more than 90 million copies worldwide. In ...

More about Barbara Taylor Bradford
Secrets of Cavendon
Copy and paste the code into your website.
New here? Learn how to read digital books for free