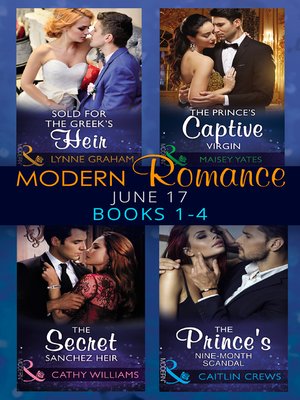 FictionRomance
Four HOT romances to enjoy this summer! Sold for the Greek's Heir by Lynne Graham With this ring... After a whirlwind affair, Greek billionaire Jax Antanakos left Lucy Dixon heartbroken and – although he didn't know it – pregnant! Lucy is determined to make a new life with her tiny daughter, yet when Jax sweeps back into her world, she cannot mask her instant response to his seductive charisma! ...I thee buy! For Jax, a ready-made heir is well worth bidding for – especially when it guarantees making Lucy's luscious curves his. He's determined to stake his claim on her body – and their baby – by reminding her of their insatiable chemistry in the wedding bed! The Prince's Captive Virgin by Maisey Yates Innocent in the beast's bed! When Belle Chamberlain offers to take her father's place as his prisoner, Prince Adam Katsaros strikes a deal. Deeply scarred by the accident that claimed his wife, Adam isolated himself in his forbidding castle. But Belle's innocent beauty could redeem his reputation as he reclaims his throne... He'll release her father if Belle poses as his mistress! Belle can neither deny nor resist her brooding captor! Adam's burning gaze awakens a new-found desire, and every touch brands Belle as his. His ruthlessness is legendary, unless Belle can tame the beast inside... The Secret Sanchez Heir by Cathy Williams 'Marriage, Abigail. Like it or not, there's no other way.' Leandro Sanchez never forgot the beautiful virgin who lit a fire in him like no other—then betrayed him. When Abigail Christie appears on his doorstep, Leandro decides one last explosive night is the only way to get her out of his system. But Abigail has a secret...their son! Leandro's discovery of the true consequence of their steamy nights leaves Abigail completely at the billionaire's mercy. The Spanish tycoon always gets what he wants, and now he's determined to legitimise his heir...by seducing Abigail into wearing his ring! The Prince's Nine-Month Scandal by Caitlin Crews A shocking royal pregnancy! Personal Assistant Natalie Monette's life transforms when she meets her secret identical twin. Except Valentina is a sophisticated Princess, unhappily engaged to the supremely arrogant Crown Prince Rodolfo. Impulsively, Natalie agrees to swap identities for six weeks. Her plan is put Rodolfo in his place...until she's enticed by the heat between them! Prince Rodolfo can't understand why, having never felt any desire for his betrothed, he now can't keep his hands off this captivating woman. But scandal abounds when he discovers who he's taken to his bed...and that she's carrying his heir!
FictionRomance

Modern Romance June 2017 Books 1 – 4
Copy and paste the code into your website.
New here? Learn how to read digital books for free