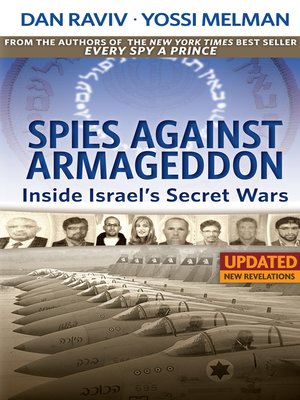 Shedding light on tumultuous events in Syria, Iran, and the entire Middle East, SPIES AGAINST ARMAGEDDON: INSIDE ISRAEL'S SECRET WARS covers more ground than any other book about modern-day Israel. Its 25 action-packed chapters and detailed endnotes are filled with colorful characters, who risk their lives and reputations in the secret service of their nation. This is a history of Israel's espionage and security network from 1948 until the present day, written by the best selling authors of EVERY SPY A PRINCE: THE COMPLETE HISTORY OF ISRAEL'S INTELLIGENCE COMMUNITY. This book takes you inside the Middle East crises of today, analyzing Iran's nuclear program and challenges for the United States. The authors also examined U.S.-Israeli relations in FRIENDS IN DEED. Dan Raviv is a TV correspondent in Washington for i24NEWS after reporting overseas for CBS News, and Yossi Melman is an award-winning Israeli reporter and columnist based in Tel Aviv. They have a global reputation for being fair and balanced, without exaggeration about Israel's covert achievements — and some flaws — in the defense of a nation that always sees itself as embattled. Chapter 1 of SPIES AGAINST ARMAGEDDON is titled "Stopping Iran," then come chapters with exclusive and carefully considered history — showing how the behavior and lessons learned in wars and adventures affect the decisions Israel must make today. Later chapters focus on the secret bombing of a nuclear reactor in Syria, the murder by a Mossad team in a Dubai hotel (Was it a mistake?), and blasting the Steven Spielberg movie "Munich" for making it look like Mossad hit men suffered frustration and regrets. SPIES AGAINST ARMAGEDDON is well researched, balanced, and a remarkably enjoyable read.

Spies Against Armageddon — Inside Israel's Secret Wars
Copy and paste the code into your website.
New here? Learn how to read digital books for free