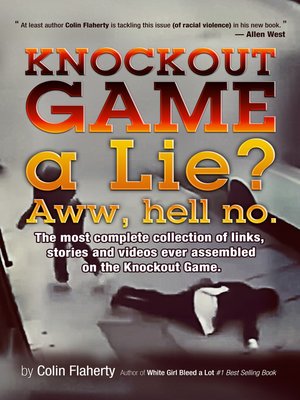 The New York Times says the Knockout Game is a lie. USA Today says it is a myth, a product of white fear. This book settles that once and for all.

This is the most complete collection of Knockout Game links and videos and stories ever assembled.

"Knockout Game a Lie?" uses hundreds of links to videos and stories that provide the compelling answer: "Aww, hell no!" It also contains a link to a video with hundreds of examples.

Created by the author of White Girl Bleed a Lot, Colin Flaherty has written more about the Knockout Game than anyone. So says American Thinker, Bretibart and Daily Caller.

"Knockout Game a Lie?" documents the denials: How the Knockout Game is a myth because black mob violence and black on white crime that is wildly out of proportion is also a myth, say the deniers.

But the Knockout Game attacks just kept happening by the hundreds.

By the time the Knockout Game became a national buzz word in November of 2013, I had been writing about it for two years. First in White Girl Bleed a Lot. Then dozens of times afterward in WND.com, FrontPage.com, Breitbart, AmericanThinker.com and lots of other places.

Critics liked it: Thomas Sowell, Allen West, Breitbart, Joseph Farah, Thomas Lifson, the Daily Caller, WND, American Thinker, David Horowitz, Jamie Glazov and others said I was ahead of the curve. Way ahead.

There is a lot of craziness surrounding the denials of the Knockout Game. These denials cannot survive the truth, so let's present that here without racism. Without rancor. Without apologies.

After you read Knockout Game a Lie?, you might try to explain it, but you can no longer deny it.

When you get there, let me know.

Knockout Game a Lie?
Copy and paste the code into your website.
New here? Learn how to read digital books for free