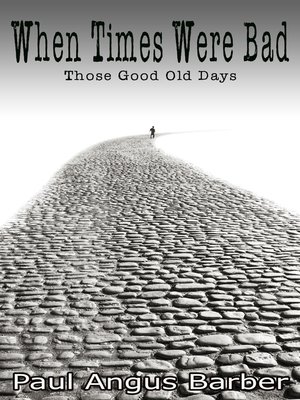 When Times Were Bad

FictionHistorical Fiction
William didn't mind caring for his Granddad, he loved him dearly, but the generational gap between them was clear for him to see. With nothing in common, he longed for a closer relationship in these, his Granddad's final months.However, Granddad rarely had anything interesting to say these days.This was until he stumbled onto the subject of his youth growing up in a Yorkshire town during the Second World War. Suddenly, his world was alive with reminiscences of the past, resilient local communities and his eventful childhood during the war years.Through Granddad's youthful eyes, William could see how his family had survived those hard times through love and close relationships, something that even now echoed through time and would have a significant effect on himself.Yet, it wasn't all good times and war spirit; it was often death, tragedy and heartbreak. Looking back through rose tinted glasses, even some of 'those good old days' were not quite that.
FictionHistorical Fiction

Paul was born into a large family in Birstall west Yorkshire. After leaving school in 1998 Paul went on to train, firstly in art and design, and then musical theatre, which led to a long history as a stage performer up and down the United Kingdom....

More about Paul Angus Barber
When Times Were Bad
Copy and paste the code into your website.
New here? Learn how to read digital books for free