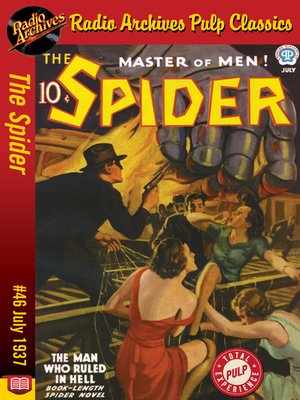 The Man Who Ruled in Hell · The Spider

Who is The Red Hand? His face concealed by horrific burns, his scarlet glove studded with acid-squirting needles, he has accomplished the most audacious overthrow of order ever attempted. For The Red Hand has unionized the entire Underworld! When Richard Wentworth, alias the Spider, is framed for the slaying of one of his accomplices, only the beleaguered police stand between society and the ravening hordes of The Man Who Ruled in Hell. But what use are the police against a sadistic super criminal who wields searing acid as a weapon? Horror follows upon horror as Wentworth battles to break jail and save New York City from looting and absolute ruin.

The Spider #46
Copy and paste the code into your website.
New here? Learn how to read digital books for free