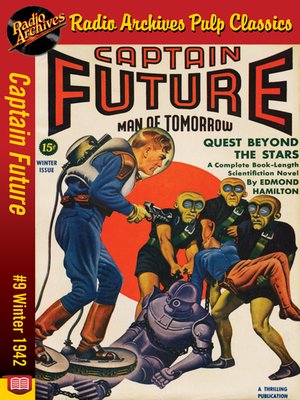 Quest Beyond the Stars · Captain Future

Captain Future...the Ace of Space! Born and raised on the moon, Curt Newton survived the murder of his scientist parents to become the protector of the galaxy known as Captain Future. With his Futuremen, Grag the giant robot, Otho, the shape-shifting android and Simon Wright, the Living Brain, he patrols the solar system in the fastest space ship ever constructed, the Comet, pursuing human monsters and alien threats to Earth and her neighbor planets. The exploits of Captain Future, Wizard of Science, originally appeared in the days before NASA's manned space program. Ride With Curt Newton, the world's greatest space-farer, and the Futuremen as they leave the known star trails to penetrate the source of cosmic rays, the very core of the universe!

Captain Future #9
Copy and paste the code into your website.
New here? Learn how to read digital books for free