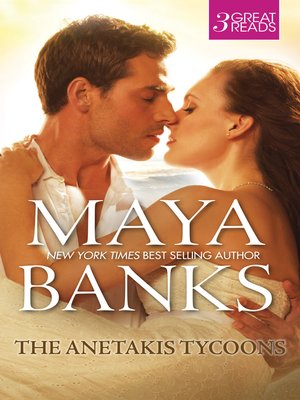 Greek magnate Chrysander Anetakis's former mistress was pregnant and had amnesia? Marley Jameson didn't remember betraying him by selling company secrets. Or that he'd thrown her out of his life. So he told her a little white lie: they were engaged. Then he stole her to his Greek island to await the birth of his baby and enjoy her sudden devotion...before tossing her out.

But he didn't count on Marley regaining her memory so soon.

Tycoon Theron Anetakis had only one problem — and she just walked through his door. With his business takeover complete, he'd intended to arrange a marriage for himself to further secure his future. However...

Little Isabella Caplan is now a voluptuous vixen with plans of her own, and they didn't include letting the executor of her father's estate also arrange a marriage for her to another man! She had pined for Theron long enough. Now it was time to seduce her hot-blooded hotel tycoon...

Jewel Henley learned the exotic stranger who'd swept her off her feet the night before was her new employer, Piers Anetakis. And before she could explain, Jewel found herself without a job...and pregnant.

After five months, Piers had finally found his one-night lover. Determined to explain the mistake made, he was confronted with an undeniable truth. Jewel was carrying his child. His Greek honour demanded they marry. Yet was there more between them than lust...and was it enough to make their marriage of convenience last?

The Anetakis Tycoons--3 Book Box Set
Copy and paste the code into your website.
New here? Learn how to read digital books for free