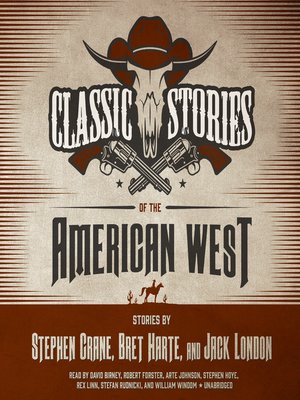 Classic Stories of the American West

Stephen Crane (1871-1900) was an American novelist, poet, and journalist. He worked as a reporter of slum life in New York and a highly paid war correspondent for newspaper tycoons William Randolph Hearst and Joseph Pulitzer. He wrote many works o...

Jack London (1876-1916) was an American author, journalist, and social activist. Before making a living at his writing, he spent time as an oyster pirate, a sailor, a cannery worker, a gold miner, and a journalist. He was a pioneer in the then-bur...

Bret Harte (1836-1902) was born in Albany, New York, and was raised in New York City. He had no formal education, but he inherited a love for books. Harte wrote for the San Franciscan Golden Era paper. There he published his first condensed novels...

Classic Stories of the American West
Copy and paste the code into your website.
New here? Learn how to read digital books for free