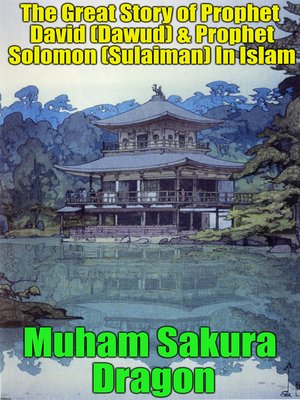 Prophet David, or Dawud, is recognized in Islam as a prophet, messenger (Rasul), and lawgiver of God, and as a righteous king of the United Kingdom of Israel, which itself is a holy country in Islam. He similarly figures prominently in the Torah and the Old Testament of the Christian Bible. David is perhaps most famous in Islam for defeating the Philistine giant Goliath (Jalut), when he was a soldier in the army of King Saul's (Talut).

His genealogy goes back through Judah, the son of Prophet Jacob (Ya'qub), to Prophet Abraham (Ibrahim). The figure of Prophet David is of extreme importance in Islam because he was one of the few prophets to receive a named revealed book. It says in the Quran that the Zabur, the Biblical Psalms, were given to David. David's son, Prophet Solomon (Sulaiman), took over the task of prophecy after his death and he was made the subsequent King of Israel.

The Judeo-Christian and Islamic views of David, however, differ in some aspects. Muslims generally do not accept the sins of adultery and murder attributed to David in the Hebrew Bible, as they feel that prophets – in their belief the utmost chosen and elect of God – would never commit such grave crimes.

Prophet Solomon or Sulaiman was, according to the Qur'an, a king of ancient Israel as well as the son of Prophet David (Dawud). The Qur'an recognizes Solomon as a prophet and a divinely-appointed monarch. Islamic tradition generally holds that Solomon was the third king of Israel and was a just and wise ruler for the nation.

Islam views Prophet Solomon or Sulaiman as one of the elect of God, who was bestowed upon with many God-given gifts, including the ability to speak to animals and control jinn (demons). Muslims further maintain that Solomon remained faithful to a one and only God throughout his life; constructed the Temple of Solomon, which became one of the key houses of worship; reigned justly over the whole of the Kingdom of Israel; was blessed with a level of kingship which was given to none after him; and fulfilled all of his commandments, being promised nearness to God in Heaven at the end of his life.

Prophet Sulaiman (Solomon) remains one of the most commemorated and popular holy figures in Islam. Muslim tradition further maintains that, along with Prophet David (Dawud) and Prophet Dhul-Qarnayn, Solomon was one of three great monarchs of all time.......

The Great Story of Prophet David (Dawud) & Prophet Solomon (Sulaiman) In Islam
Copy and paste the code into your website.
New here? Learn how to read digital books for free