The Philanthropic Revolution: an Alternative History of American Charity 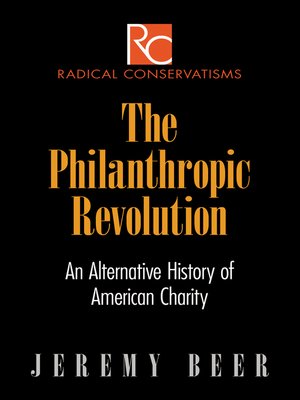 When we talk about voluntary giving today, we usually prefer the word philanthropy to charity. Why has this terminological shift taken place? What is its philosophical significance? How did philanthropy come to acquire so much prestige—and charity come to seem so old-fashioned? Was this change contested? Does it matter?
In The Philanthropic Revolution, Jeremy Beer argues that the historical displacement of charity by philanthropy represents a radical transformation of voluntary giving into a practice primarily intended to bring about social change. The consequences of this shift have included secularization, centralization, the bureaucratization of personal relations, and the devaluing of locality and place.
Beer shows how the rise of "scientific charity" and the "new philanthropy" was neither wholly unchallenged nor entirely positive. He exposes the way modern philanthropy's roots are entangled with fear and loathing of the poor, anti-Catholic prejudice, militarism, messianic dreams, and the ideology of progress. And he reveals how a rejection of traditional charity has sometimes led philanthropy's proponents to champion objectionable social experiments, from the involuntary separation of thousands of children from their parents to the forced sterilizations of the eugenics movement.
Beer's alternative history discloses that charity is uniquely associated with personalist goods that philanthropy largely excludes. Insofar as we value those goods, he concludes, we must look to inject the logic of charity into voluntary giving through the practice of a modified form of giving he calls "philanthrolocalism."